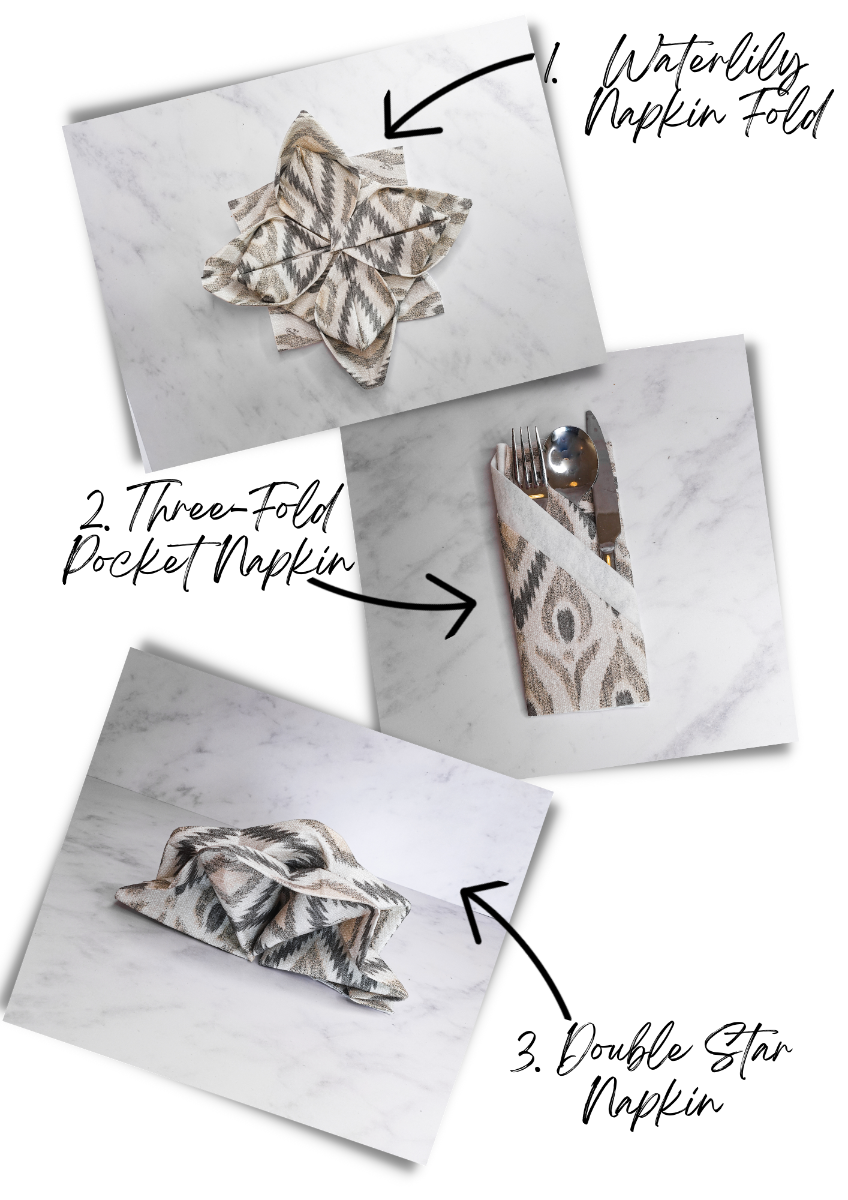 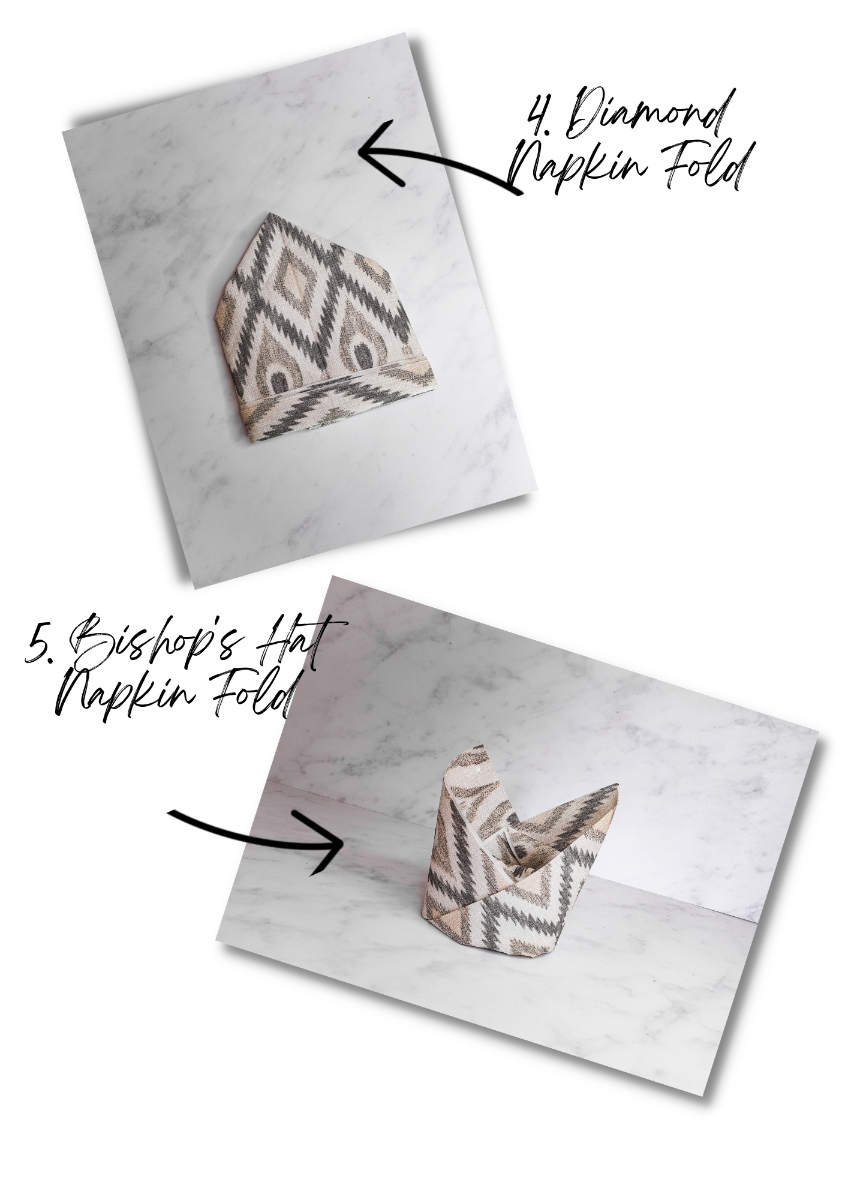 Napkin folding has become a real art form in recent years, yet the form of napkin folding has been gracing tables in the 16th Century around Europe, specifically in France and Italy where you'd usually find them placed on the tables of royalty, nobality or the gentry. We take a look at the 10 napkin fold designs ranging from relatively easy folds through to intermediate folds.

All the following folded napkins were done using the Duni Dunilin disposable napkins 40x40cm in the Malina Nature compostable design (SKU:AQ992). This type of napkin is thick and takes on a similar form to that of a linen napkin.

Elegant and intricate in its design, the waterlily napkin fold looks hard to create but rather simple to do when you get the knack of it. Easy to present on a plate and spacer and looks fantastic in a plain or printed napkin.

A simple and practical design used to store cutlery in the pocket. An easy to create napkin fold and can easily be done ahead of time, this type of fold has been found to travel well when created so it’s perfect for catered events and weddings.

A step up from the norm when it comes to the usual fan designs usually found within restaurants and hotel brasseries. The double star is a little trickier than the above two napkin folds and the base creases need to be sharp to hold when released, but it

A simple flat laid napkin which can also serve as a cutlery pocket holder.

A traditional staple when it comes to napkin folding, the bishop’s hat is easy to fold and easily transported to events or folded beforehand.

The pinwheel napkin fold is a fun way of presenting the napkin to customers, easy to fold and not really seen that much.

The artichoke napkin fold is similar to the waterlily but slightly larger in comparison. An easy and elegant choice when it comes to napkin folds.

If you’re after a small and chic upwards standing napkin adorned with a fan of pleats along the side, then perhaps the opera napkin fold is for you.

The pyramid napkin fold is an easy fold to complete and travels well if you need to make up this napkin before a big event such as a wedding or an event.

A classic in napkin folding, these fan napkins look elegant yet exsubes understated quirky and obsure. An easily created fan napkin will look perfect for almost any occasion. 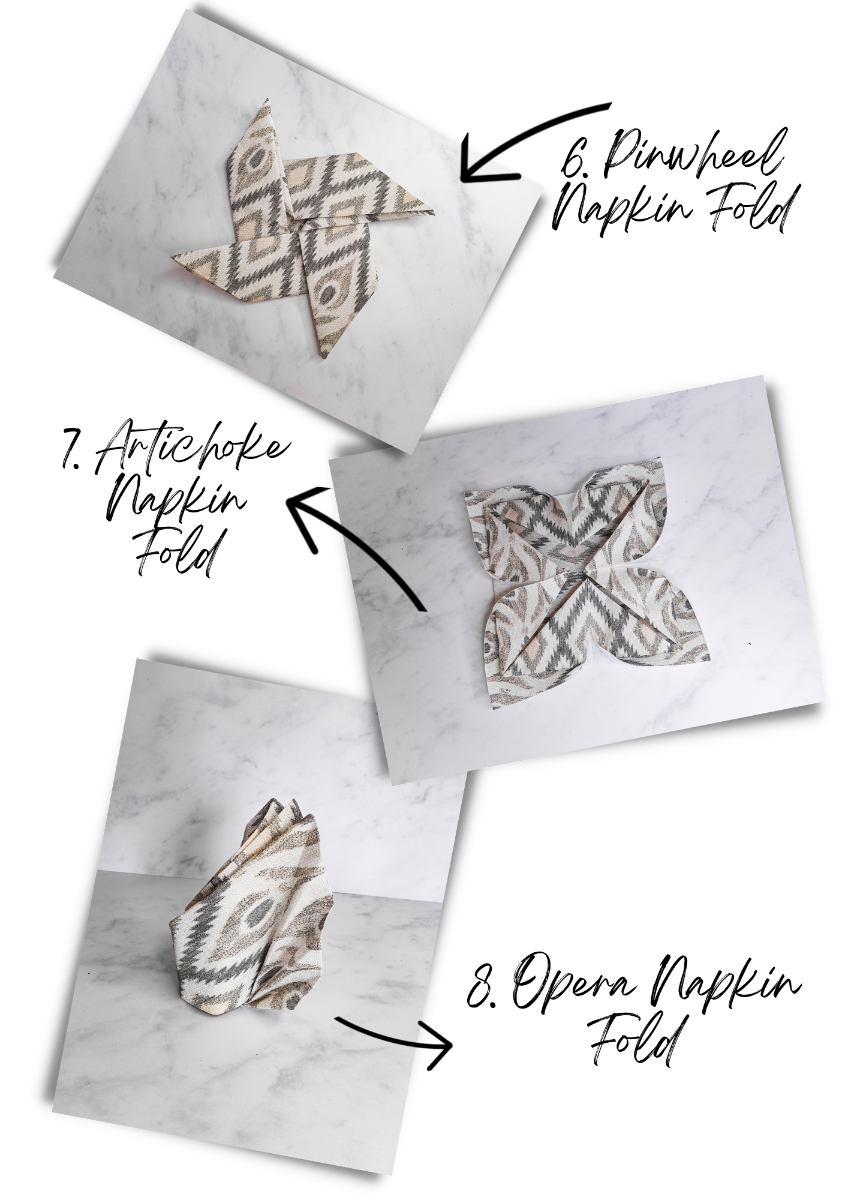